Relationships between companies and their customers are forged and secured when a bond of trust has been established. Some of the strongest of these relationships are created when both sides speak to each other face to face.

However, now more than ever, people are interacting with companies through mobile apps, in-store kiosks and websites. A sense of intimacy has departed because of the "Selfie" genre that is upon us. No longer do people need to line up in banks to pay bills or visit stores to purchase products when they can simply jump online and conduct their business with ease.

It is only with good intentions that a company would want to build a system of sorts that would cater to its online customers, but often times, this system — when not designed well — can actually damage the relationship a company desires to have with its customers. People are no longer listening to the loudest voices when it comes to companies who are screaming out for their attention. Rather, people are listening to the voices of other customers to guide them.

For example, how do people choose which apps to download when they're looking for a specific app to accomplish a task, but don't know which one to choose? They take a look at ratings and reviews. This is called the "social verdict." People are looking to their fellow online reviewers for answers. No longer do we need to investigate online products and services, because our online peers are already doing the research for us.

The customer is always right

An app's ratings and reviews are very telling. Consumers have the power to make or break a company's reputation based on online reviews alone. Take a good look at poorly designed apps in Apple’s App Store or Google's Play Store and read what people are saying. Essentially, people are complaining about either the app not working, or about flawed design issues that hinder progress and make simple tasks difficult.

Below are reviews people have left with regards to poor design. Read them carefully and try to place yourself in their positions. How do these reviews make you feel? What is your opinion of the companies that invoked these poor reviews? 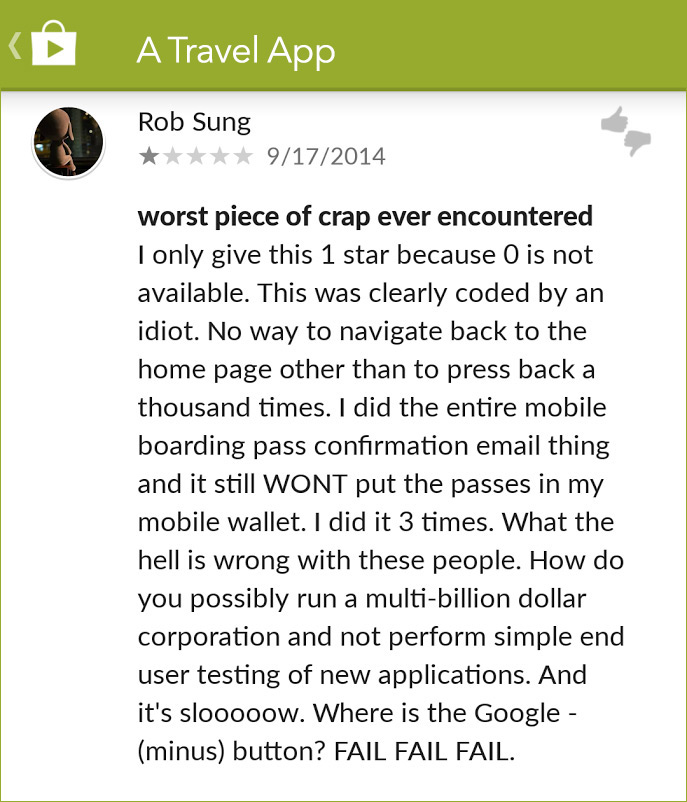 Judging by these remarks, there is a deep sense of disappointment that these people are left with. Many users who leave their remarks do so with the intent to hurt the app creators — not because they are vindictive people, but because they believe that this is the only way their voice will be heard. They are sending powerful messages laced with frustrated emotions to companies.

Now, let’s take a look at a few comments where things are designed well and are indeed easy to use. 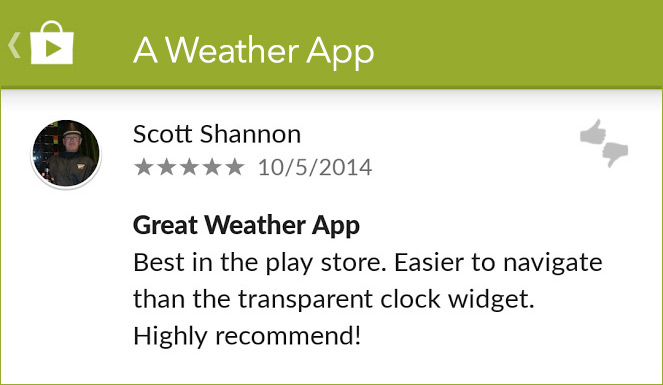 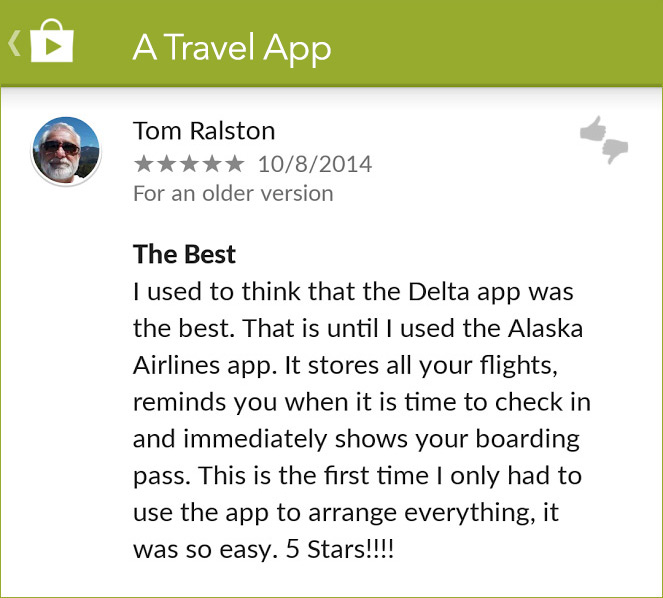 What a refreshing difference! An interface that is designed well and pleasing to the eyes will actually enhance brand loyalty, simply because it's easy and enjoyable to use. There is great emphasis being placed on the emotion and experience of things. I would dare say most companies overlook these two soft words as passive “feel-goods” that have a place somewhere at the bottom of the list. But according to usability experts and the ever-increasing voice of customers everywhere, emotion and experience are the aftertastes left in the consumers’ mouths, which ultimately drives their decisions.

We create bonds by superseding our own due diligence and relentlessly fighting on behalf of our customers. We should be consumed with the thought of putting a smile on people’s faces, and helping our customers interact with our digital services effortlessly and in a timely manner.

With the release of Google’s new Material Design, they have proven to be experienced design experts who have taken an already simple and minimalistic interface and introduced a finely tuned, interactive experience that is more people friendly and makes an effort to amalgamate the human/computer connection.

With people already being addicted to coffee, Starbucks has successfully reinforced its brand by featuring mouth-watering cold drinks during a heated summer and making a big splash in the market with the ability to Tweet a coffee to a loved one. Its app is seamlessly infused into most people’s smartphone experience - thus making it a big part of their everyday lives.

Having received many critical online reviews (both official and from the general public), Netflix has tirelessly made improvements to its various interfaces. Whether it be for a laptop, smartphone or Xbox, Netflix continues to listen to the voice of the people and making slight adjustments to better improve the viewer’s experience.

Nike continues to wow me with its Fuel line. Not only are people generally getting in shape, but Nike was able to bring people together on a whole new level of social fitness. All across the world, athletes and common folks are joining online teams to compete in various activities in order to rack up points and gain bragging rights. If you’re not into the social aspect of it, Nike’s Fuel systems help encourage the user with victory sounds, chants and progress, and allows people to immerse themselves in their own athletic worlds while trying to get in shape.

OnePlus just released its flagship smartphone device this year entitled the “One”. With specs that supersede the iPhone 6 and on par with the Nexus 6, OnePlus One was able to viciously capture the market by offering a 64-Gig device that only costs $349.00. The sounds and visuals on this device are mind blowing. The One looks super sexy with a 5.5” screen (and still smaller than Apple’s 6+). Just unboxing this device alone was breathtaking. The packaging, design and care of the product were superior, and accessories are solidly made. Currently, you have to be invited to buy the One or you can sign up for pre-order. Right now, there are currently over 20,000 people who are waiting to receive this device on pre-order alone. Not bad for a first-year smartphone release.

Keep the customer top of mind

If you are able to keep the customer top of mind — from the time you start development to the actual release of the product — your customers will praise you for it and their voices will be heard by fellow online peers.